I’d bought this beautiful Tarte aux Fruits at La Provence in Orenco Station Friday and served it to a group of Smith graduates meeting at our house Monday evening. Now, I wake before dawn on Thursday to find a ready-made slide show of that evening on Facebook, and perhaps, by some powerful chance, a possible answer to a question that kept me awake part of the night.

First, I can explain. During the meeting of this diverse group of women, I had a chance as the eldest to describe briefly how similar what is happening in this country now feels to what was happening in Austria in the late thirties. And I could urge these women to resist, to speak out against white supremacy, against Islamophobia and anti-Semitism in all their forms. Unjustified police use of force is just part of this. We are all threatened. 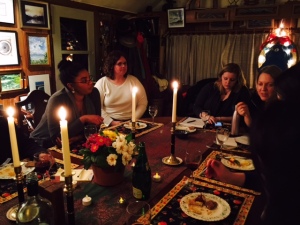 Next, yesterday noon, in another setting, a friend described to a group the experience her elementary school grand-daughter was having in the classroom: classmates were shouting “Heil Hitler,” and making anti-Jewish slurs, in the presence of teachers, who were condoning the behavior, doing nothing about it. A parent so far had had no response from the principal to whose attention she had brought the problem.

It may be that other children will be the most effective teachers of kindness and tolerance. Lower graders would respond best to a diverse group of upper graders who came into their classroom and sat down for a serious talk, with this message: the United States is a country where Christians and Jews and Muslims have a right to be free and not bullied, where we will protect everyone who is not trying to hurt someone else. If your parents are teaching you otherwise, it is up to us to help them understand a different way.

I acknowledge how difficult this seems and how possible it is that there are many who don’t want it to happen. But I will hold onto the image.

One thought on “We Are All Threatened”