I walked in old streets in Cádiz yesterday, no camera in hand. The whole immense bright clean industrial city was as though disappeared. It was Sunday, a few stores open here and there, buildings almost meeting overhead behind shutters, narrow cobbled one-car-width streets with a small raised sidewalk on each side, barely wide enough to get you out of the way of the occasional car. They converged at a little plaza with trees and a church. I could have been in the 16th century, between cars.

We are about to come in to Casablanca. My first time on the continent of Africa. It will be purely symbolic since it’s just that….a touch. But I can pay homage to Humphrey Bogart et al. And I want to know what it looks like. Just looking at all sides of Gibraltar was good too. The cliffs, how it lies in relation to Spain and the sea. We will see Madeira too just that way, our day in Funchal.

Have been drawing and sketching. Happy.

We got talking about our time in Spain and Portugal in 1979. There was a flock of goats in the Algarve, just as we’d crossed on a ferry into Portugal.

Chugging toward Gibraltar today, arriving after lunch which is unusual, and leaving this evening. It was strange going along looking at the coast of North Africa, blue in the near distance, mountainous, all yesterday afternoon.

We had a wonderful talk about Garibaldi yesterday. Had never realized what a universal man he was. Lincoln considered hiring him in the civil war, but thought better of it as G. wanted to be in charge of everything. 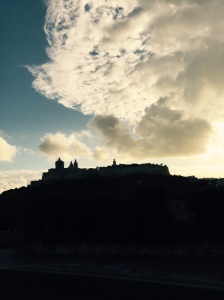 MALTA – For any one living in the 1940’s, not to mention in the 1190’s or 1430-40’s, there would have been no question of where Malta was or of why any of it was of the least importance. For me it has been an abstraction of indeterminate location, made of stone, a place where people convened, made momentous decisions, or chopped off people’s heads, built rosy-sand colored walls. We now know a little more about the turns of their roads, their soil (gravely and rocky), that they built stunning walls with little mortar, and that they have a traffic problem at rush hour. Their big cities are more like towns, but they have fine shops, huge hotels, and you can drive a loop from one end of the main island to the other, on good roads, in a little over four hours.

I never heard any one speak the language, which is mostly Arabic, and I don’t know how you pronounce names like Qawra. But the signs are mostly written in the Roman alphabet, and in English.

When Jean la Vallette finally ended up there with his Knights of St.John, having been driven out of Rhodes, where the hospice they started in the 12th century still exists, it was the end of their long and bloody journey. He is buried there, and the port of Valletta where we were docked is named for him.

The sun rose just as we were leaving for another island yesterday and cast our moving shadow along the harbor walls.

I found this unexplained “paper boat” sculpture made a nice design with those two little white cars. The memory we will take away above all though is the clouds. It’s almost as though the firmament is marking this ombel of the sea with an exclamation.

2 thoughts on “Turning Westward from the Far Mediterranean”