The first leg of the journey is complete. We are staying in the Ramada Inn in Ft. Lauderdale, all surrounded by freeways. Windy and cool here. We are all set to board Rotterdam tomorrow. In the gift shop I found a small bag to carry my wallet and passport and things so I don’t have to carry my whole big purse. Today we are going on the sightseeing boat tour where you can get on and off at various places around Ft. Lauderdale.

Our taxi driver this afternoon was named Lodrer (pron. loh-DRAIR), and when I found he didn’t understand really anything we said, I tried French, and sure enough, we launched into a rapid conversation. He was probably 65, from ‘ah-ee-TEE,” and took us not only to Target but back via another way and safely home to our Ramada nest. I’m so glad we scheduled in this day of rest between train and ship! The floor rises still beneath our feet, the way it does when you’re just off a small boat.

On the last leg of the train trip from Portland we were passing through piney, sandy woodlands and I realized we were parallel to New Smyrna Beach, Fla., where Tom was conceived. It was when Gramps and Minie (his parents) were starting a school down here, and his brother Bill was a baby. 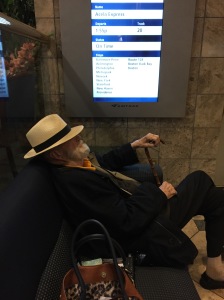 The train from Washington, D.C., was very wobbly, throwing you around a lot because of bad roadbed, and had to sound its horn almost steadily: looooooong, loooooooong, short, loooooong. It didn’t make for very peaceful sleep, but we didn’t wake up for good until we’d been in bed for 10 hours. We had a good breakfast in the cafe car right next to ours.

The morning before arriving in Washington, we woke in Southern Pennsylvania and those lovely woods had lots of yellow in them. Then into the amazing terrain of West Virginia. In the train station was saw Amish families, and Tom took a nap.

We had come through Chicago and the high route through Montana.

In the Chicago train station we saw Amish families. The children were leery of getting mowed down by the cart that was carrying us and our carry-on luggage. Even the tiniest girls wear the dark bonnets, all of that same design. Every time we’ve come through here, there’ve been groups of Shakers and Amish, different bonnets, different styles of clothing. One group was even singing acapella. 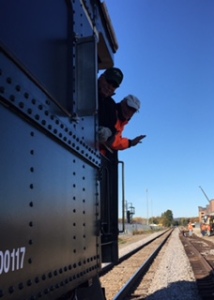 As for these two guys, one of whom is named John, they actually own this restored private car. They caused it to be hitched on right behind our car which had been the last.

All that happened in the dark near St. Paul, about 5:30 a.m. I later talked to them and find they’re heading to North Carolina to do some job or other. Perhaps buy another railroad?!