And…
Thanksgiving was a rich time, all of us at our grand-daughter Emily’s and Alex’s house. Noah who is just two loved the blinking glasses we brought him from Holland America. We remembered people far away, and talked of beloved people gone: Harve Bellos, Eileen Allen, Fred Goode. Below the picture is another post from the South Seas that didn’t make it through during the trip. 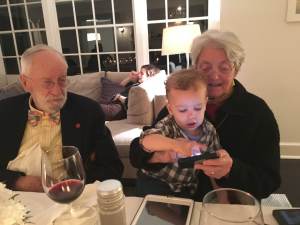 A new friend named David Brunk may post on his Facebook page something that will include our blog.

The clouds are the shifting beauty as you come toward these islands. This one, Rarotonga, is mountainous, and when the sun is partly behind clouds, you get dramatic patterns. We’re right below the equator and right next to the meridian exactly opposite to Greenwich, coming into the Cook Islands and French Polynesia.

A huge screech announced the opening of the roof over the pool as I was drawing the Bears about six this morning. 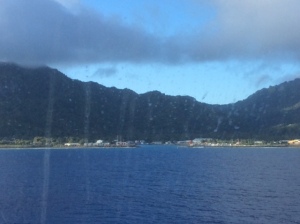 An interesting interview with the captain, Arjen van der Loo (Aryen van der low) yesterday. At some ports when we’re lying off but don’t put down our anchor, he says, it’s because the shelf  where the depth would be right to anchor is so narrow, it’s safer not to try, but just to use our thrusters to maintain position. The weight of the anchor plus its chain is so great, you couldn’t get it aboard again if the whole thing had paid out. He is wonderful, good sense of humor and very articulate. We’ve known him before on another cruise.

Now we begin to see the opening to the harbor. VERY narrow. Turns out the U.S. is the only country that observes “Red Right Returning” with buoys. The rest of the world does the opposite! Seems ornery of us. I wonder when that was set up…1776?

We’re sending in our launch to clear with port authorities.

And now we’ve stopped, swung our stern toward shore, and will not go in to the inner harbor. Tom really can’t manage getting into a tender, and today would be even harder than usual since there’s enough swell to make it very up and down at the boarding platform. We have plenty to do though, with my singing group (small but fun) at two, various projects during the morning. Found a table where I could spread out book making stuff. Used paper from the FedEx packing material to cover the table (which was a bridge table) to protect it. We made masks for tomorrow’s dinner.

You can see what skill it takes for the tender drivers to maneuver. The ship is being held in such a way that it creates a lee for their arrival and letting off passengers.

The talks we’ve had daily, given by Kainoa, by Mel Foster and by Sadie and Charlie Urbanowicz, mean that we come in to these ports having a new sense of the islands’ cultures and of their place in the world: rather “how they are connected by the ocean” than “how they are separated by the ocean.”

Jim Boring, in Writing Group, made a nice parallel between that and our lives, our coming together for this short time, and the intensity of these relationships. I hope he may put on here the poem he wrote last week, encapsulating that experience.

We always look forward to Nancy and Kirk Taft’s photos when we arrive at supper. They’ve usually hiked, and they take wonderful pictures. We are at separate tables for two, but right next to each other.