Even though you can see Hawaii in the virtual world of Navigating instruments from the moment you leave San Diego, still there must be a little thrill as you see with your own eyes the great island loom through mist after several thousand miles. First just the low shape on the horizon, then gradually the differentiation of 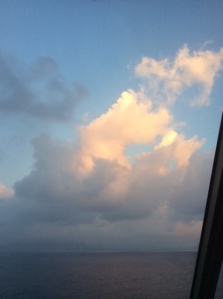 fields and trees, the brilliant flashes of white waves crashing against the rocks, but silent for us.

It is fun coming in by sea to a place we once explored by car and on foot. A long breakwater extends out in an oblique L from the south end of the town. Once inside it, we’re slowed even further. “Leave that buoy to your starboard, for heavens’ sake!,” I think, as we ghost along past hotels and marinas, the angle of my view from the Crow’s Nest in the bow making us seem deceptively close to reefs that extend out toward us.

From this height I can see over the tops of oil storage tanks and sheds to planes landing and taxiing at the airport, green fields and woods beyond. The sun has come out and means I can tell we’re docking heading SE, unexpected on this coast, but we and the shoreline must have taken several curves I wasn’t aware of.

The next morning is quite a different picture: we wake to the sound of anchor chains and hydraulic lifts lowering tenders. The sky is blue with little clouds, and mountains go up quite steep on Maui before the point levels off toward Lahaina. I watch one of the tenders taking an early group of Shore Excursioners in to their buses. It follows a kind of crazy zigzag path at first, and I wonder if the  pilot is confused about which dock he’s supposed to land them at. Hardly likely, they’ve done this so many times. But it appears they are supposed to stick to a certain path In past moored pleasure craft. 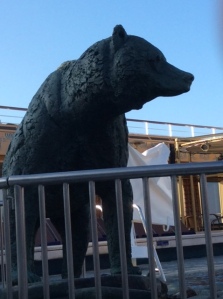 The advantage of taking a hot tub this early is that the sun hasn’t hit it yet, and there is nobody in it you feel you have to talk with. The metal statue of the great mother bear looms over me. I drew her and her cub the other day, but from this angle she looks even more alert and protective.

I drift and let the jets buoy me. One of the crew comes by filing the open towel cupboards at the corners of the pool with fresh dark blue towels, each tightly rolled. I can remember when I’ve had repetitive jobs like that, arriving every morning, putting on a uniform, making beds or taking people’s orders for lunch, or putting instruments and gloves in an autoclave and waiting for them to be done.

Both those jobs were in health care facilities, the more recent one at St.Christopher’s Hospice outside of London where I volunteered two days a week for a winter. The other, so different, was in the late forties at the Brattleboro hospital when I was a senior at Putney. Dr. DeWolfe had found me the place. And it was he who got permission from  his patient, a woman having her sixth child, for me to be present at the birth, an experience that probably influenced my life more than any other single event.

There was a wonderful mnemonic we learned when we were studying French, to help us remember which verbs were conjugated with ‘etre’ and which with ‘avoir:’ “The ins and outs, the ups and downs,  the comings and goings and the Extremities of Life, are conjugated with the verb to be.” Je suis arrivee but J’ai achete un chapeau.  In the world of work and interests, my life seems to have been involved often in “the extremities of life.” Maybe it hasn’t always been planned, but I’ve delivered a baby, sat with people as they died, and maybe “the holding of opposites” that I use as the subtitle of “Well-Being and Being Well” has something to do with it.

One thought on “Landfall at Hilo”